Australia actually stopped using the term ‘calories’ in 1988. Which is why you’ll notice that all the packaging here in AUS lists energy as Kilojoules (kJ). However when we do talk about calories we are typically referring to a kilocalorie (kcal) which is also known as a large calorie. A kcal or large calorie contains 1000 small calories. Just think of it like talking in kilograms instead of grams but for food instead, it just makes it easier.

The conversion of the two is 1 calorie (kcal) = 4.184 kilojoules (kJ). Once again to make things easier when making conversions we can round the kilojoules down to 4 per 1 calorie. This means when you’re reading food labels you can just divide the kilojoules by 4 to get a rough idea on the calores.

The amount of energy someone should consume in a day can vary quite significantly but as a point of reference the average adult needs about 8700 kilojoules (kJ) a day to maintain a healthy weight. That’s just over 2000 calories.

Not sure where to find the energy on labels? Here is an example. 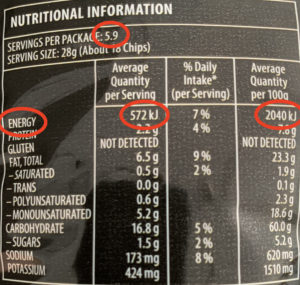 When figuring out the calories from a label it’s really important you check the total energy AND the amount of servings it has. A lot of people miss this which will completely change the calories in whatever you are eating or drinking by a lot; and yes companies do use this to their advantage to trick you.

So one while one serving is only 143 calories, the whole packet is almost 6 x that amount.

If you would like a more specific guide to your recommended daily energy intake then check out the nutrition calculators at the Australian Eat for Health website – www.eatforhealth.gov.au